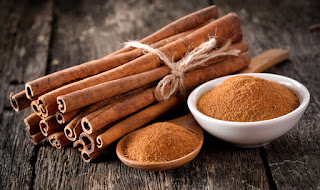 Cinnamon has been used as a medicine by the Chinese & Ayurvedic people for thousands of years. The benefits from this simple inexpensive spice are enormous. It used to be more valuable than gold, because of it's healing & preservative properties. It's mentioned in the Bible numerous times & the ancient Egyptians used it as a perfuming agent in their embalming ceremonies over 4,000 years ago.

There are 2 basic types of cinnamon: ceylon & cassia. Ceylon is known as the true cinnamon while cassia is the more common variety, but still referred to as cinnamon. Cassia is a darker brown-red  in color with thicker sticks & a rougher texture than ceylon. After it gets extracted, it's dried, then strips are formed that curl into the rolls you are used to seeing. The rolls are then ground up to make the powder form. Roughly 95% of its oil is cinnamaldehyde, which gives the cassia cinnamon a strong flavor. Cassia contains a significant amount of coumarin, which is believed to be harmful in large amounts. This type of cinnamon is cheaper, but more widely used.

Cinnamon outranks the superfoods such as garlic & oregano, maybe even turmeric! It can be used as a natural food preservative.

It can help with blood pressure, heart disease & it's been shown to significantly increase sensitivity to the hormone insulin. If one is diabetic, you can take 1/2 - 2 tsp. of cinnamon daily to help lower your glucose levels.

Studies show it can help with Alzheimer's & Parkinson, but that area needs more research. It can, however inhibit the growth of bacteria including listeria & salmonella.

Cinnamon is anti-viral, an analgesic, anti-microbial, anti-inflammatory, it can stabalize blood sugar, is a digestive aid, anti-fungal, anti-bacterial, rich in anti-oxidants & can even help to reduce cholesterol.

All in all this seems to be a pretty potent spice to add to anyone's daily diet, don't ya think???

Posted by Herbmama at 8:45 AM
Email ThisBlogThis!Share to TwitterShare to FacebookShare to Pinterest