The Ins & Outs of Canola Oil 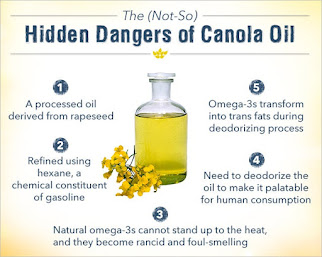 Are you on the fence as to weather canola oil is full of the healthful benefits they are saying?? Some say it's poison & contains the same substance as the warfare agent mustard gas, is responsible for most maladies from mad cow to blindness. Then again, some say it's one of the healthiest foods around as it contains high levels of omega 3's, low in saturated fat & excellent source of oleic acid.
It's the 3rd most produced vegetable oil. Canola meal is one of the most common protein meals on the planet, 2nd only to soy.
First off, there's no such thing as canola meal. The canola plant doesn't actually exist! It's derived from the rapeseed plant which is a member of the mustard family. Researchers found out how to chemically engineer it to meet the FDA standards for human consumption. Rapeseed has significant health risks due to high levels of erucic acid, a monosaturated omega 9. It's found in soaps, lipstick, lip gloss, printer ink, biofuels, insecticides and more!
When it's finally broken down, it's one of the largest contributors to the omega 3 & omega 6 imbalances. The ration of omega 6 to omega 3 should actually be like a 20:1 ratio. That imbalance can cause inflammation, chronic diseases & auto-immune diseases.
It's a GMO & a Canadian invention backed by the Canadian government. It's cheap to produce. Many packaged or process foods contain it. In 1998 the most disease & drought resistant canola variety to date was developed using genetic modification.
A type of vegetable oil, the canola plant was derived from the rapeseed's seeds in order to produce a food grade oil with lower erucic acids. End result is a high omega 6 fat content. Eurcic acid has been linked to heart damage and found in rapeseed & mustard oils. The oil is made by refining, bleaching & deoderizing. A solvent called hexane chemically extracts the oil from seeds.
Over 90% is grown in the U.S. & is genetically modified. It's the 2nd largest oil crop in the world. Aside from small amounts of Vit. E & K, it's devoid of vitamins & minerals. They use high amounts of it to make canola butter which the public thinks is more healthy than regular butter, but it isn't.
Health hazards include increased inflammation, impact on memory & heart health. It's just not a healthy oil to be consuming. There are many other healthy oils out there such as avocado, coconut, olive, ghee, butter, flaxseed, hemp seed & red palm (certified sustainable).
Posted by Herbmama at 9:48 AM
Email ThisBlogThis!Share to TwitterShare to FacebookShare to Pinterest