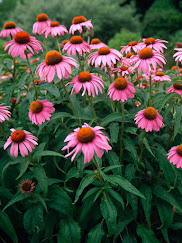 So it was bound to happen eventually where I do a blog on the infamous echinacea. There are many more herbs like it out there to help with the same issues....why do people consistantly go to this one herb??? In my research I found there was much more to it than I ever suspected.

Echinacea belongs to the daisy family. There are 9 species of it, but only 3 are used herbally. It's commonly known as the purple coneflower. It has been widely used in natural medicine for over 400 years & widely used by the  medical community. It lost most of it's usefulness after antibiotics caused a massive shift in the medical world.

High in antioxidants such as cichoric acid & rosmarinic acid which help to defend against oxidative stress that can lead to disease.

Now, according to research, echinacea works better once symptoms have appeared & it's not to be taken as a preventative. One should only take it up to 10 days, then take a break from it before continuing. Be careful of imitations as there are many out there, unfortunately. Apparently there are products out there that say they contain echinacea & they don't contain any!! The extracts you see everywhere are essentially tinctures, so don't let that fool you either. It's safe & well tolerated for short term use. Use caution against taking too much. Do not use it for seasonal allergies. Use extreme caution against injecting it!

As I've been saying all along, do not take it on a consistent basis. I was not aware though about all the imitations & trickery involved. Again, do your research, ask questions, be aware!!!


Posted by Herbmama at 9:17 AM
Email ThisBlogThis!Share to TwitterShare to FacebookShare to Pinterest