The Power of Cinnamon Essential Oil..... 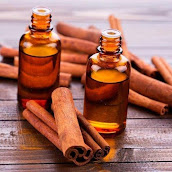 Cinnamon bark oil is like taking an intense whiff of ground cinnamon. It comes from the bark, is more brown in color & is more expensive than the cinnamon leaf oil. The leaf oil has a musky & spicy smell and is more of a yellow & murky in color. They both are potent, the bark oil may be a bit more potent though.

It is highly concentrated with anti-oxidants which makes it an effective natural digestive aid, blood sugar stabilizer, circulation booster, can aid in cardio vascular disease & help to fight infections. But the oil itself especially has strong anti-parasitic, anti-inflammatory, anti-viral & anti-platelet properties.

Do NOT ingest or apply topically without dilution first!

A prized ingredient in our Quartzsite Krud Kicker!!

Posted by Herbmama at 9:40 AM
Email ThisBlogThis!Share to TwitterShare to FacebookShare to Pinterest