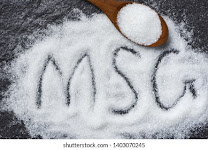 MSG is short for monosodium glutamate as most of us already know. It is a common food additive that enhances flavor. It's a big controversial subject & most government sources, including the FDA, say it's safe. So let's see what we can do to wade through the information that's out there.

MSG is derived from the amino acid glutamate, which is a type of protein & is normally found in fruits & veggies. It is one of the most abundant amino acids in nature. The body uses it & needs it too. It is a non-essential amino acid which means your body can make it. It's found in nearly all foods & provides several functions to the human body. They combine sodium & glutamic acid, also known as sodium salt. This acid is made by fermenting starches, but there is no chemical difference between the glutamic acid in MSG & in natural foods. BUT the glutamic acid in MSG may be easier for the body to absorb because it's not bound inside big protein molecules that the body needs to break down. Glutamic acid functions as a neuro-transmitter in the brain. It stimulates nerve cells to help relay it's signal.

It is true that increased levels of glutamate activity can cause harm & large doses can raise blood levels of glutamate. However, dietary glutamate shouldn't have much effect on the brain as it can't cross the blood-brain barrier. Some claim that MSG leads to excessive glutamate in the brain & excessive nerve cell stimulation. This is why it's labeled as an excitotoxin. So far, no compelling evidence has been found that MSG can act as an excitotoxin when consumed in normal amounts. Eating large amounts of MSG can cause the glutamate to cross that blood-brain barrier, interacting with neurons to cause swelling & cell death.

The big factor here is that MSG is found in so many unhealthy processed foods that lack essential nutrients for the body. Since it's processed in the body very differently, it's believed this fast increase is what causes the side effects. It is claimed to cause: free radical formation, metabolic syndrome, asthma, flushing, headaches, brain damage, high blood pressure, hives, burning sensations in the mouth, head & neck & even cancer. It's also traditionally found in Asian foods.

It's because of the synthetic manipulation & processing of glutamate which produces a form not found in nature. Recreating a product of nature tends to have less than desirable results as we all know.

Are you highly sensitive? Go to msgmyth.com to get all the other names it goes by as they continue to sneak it into our food systems.

Posted by Herbmama at 9:06 AM
Email ThisBlogThis!Share to TwitterShare to FacebookShare to Pinterest