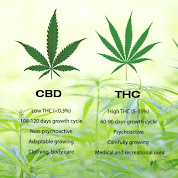 The key to understanding the truth about cannabis oil uses is to learn what hemp is compared to marijuana, which are both made up of the Cannabis sativa plant.
The breeding practices and utilization of the plant actually determine which term we should use. Meaning this: Marijuana is the correct term to use when describing a Cannabis plant that is bred for its medicinal or recreational use. It is known for it psychotropic effects due to the high amounts of THC that are extracted from the resinous glands (known as trichomes). Cannabis plants engineered as marijuana (not hemp) contain levels of THC ranging from 3% – 15% while plants grown for industrial hemp contain less than 1%. There 3 primary ways marijuana is cultivated and manufactured:
Hemp, on the other hand, is the proper term to use for Cannabis strains that have been cultivated for its fiber and/or seeds, which are used to make a wide variety of products. Cannabis grown this way contains trace amounts of THC and CBD, which has been shown to block the effects of THC on the nervous system. It has been suggested that “low THC levels and high CBD levels in hemp plants negate any psychoactive effects.”
Products made from industrial hemp are supposed to contain less than 0.3% THC, which is the legal amount to buy, consume, sell and ship the product. This 0.3% is the standard to distinguish between what is classified as “hemp” and what is classified as “marijuana,” but there has been some concerns that the amount of THC in hemp seeds and other consumables are not consistent. This is why organizations like the Weston A Price Foundation strongly recommend caution when eating hemp seeds.

First off, so-called “Cannabis oil” is not an essential oil and the name is misleading. Here's the low-down:
From what we can tell – although this conclusion is mostly based off of personal reports and not clinical trials – conventional Cannabis oil (being rich in THC) gets people “high,” whereas CBD oil cannot.

So, what is cannabis oil? This is where things get really fuzzy. I'm sure you've seen the term “Cannabis oil” being thrown around the Internet the last few years. Heralded to cure everything from cancer to glaucoma, activists are using research and countless miracle testimonials to convince legislatures nationwide to legalize marijuana for medicinal use. One of the reasons why we're hearing so much about Cannabis oil is because of Rick Simpson. In 2003 Rick utilized a homemade Cannabis concoction as a cure for skin cancer. He shared his success with his doctors and some cancer organizations, but no one paid attention to his story. His reaction is somewhat intriguing as he responded by growing his own plants and produced his own Cannabis extract, calling it “Cannabis oil.” Giving it away for free to people in need, he reports healing over 5,000 people with this medicine. The confusion enters the scene here because Rick didn't make Cannabis oil, he made a Cannabis extract or an absolute. Big difference!

Technically-speaking, regardless if we're talking about conventional “Cannabis oil” or CBD oil, both are extracts or absolutes, NOT essential oils. So, referring to them as “oils” is misleading. To clarify...essential oils today are manufactured primarily through steam distillation or expression (“cold-pressing”). Another technique is referred to as solvent extraction.

Let me assure you that the difference between essential oils, extracts or absolutes is not merely semantical. Each contain different chemical compositions, which means they all have different effects on the body, and each have different safety concerns

In the 2013, the journal Cannabinoids published a full report on the chemical constituency of 5 different preparations of cannabis extract based off of the following solvents: ethanol, naphtha, petroleum ether, and olive oil. Here are the main takeaways directly from the article: (4)

As an added note, the study was clear to state that, “All the solvent components should be considered harmful and flammable, and some of them, such as hexane and benzene, may be neurotoxic. Both naphtha and petroleum ether are considered potential cancer hazards according to their respective Material Safety Data Sheets (MSDS) provided by manufacturers. Moreover, products sold as naphtha may contain added impurities (e.g. to increase stability) which may have harmful properties of their own.”

In the words of a 2007 article in the journal Dialogues in Clinical Neurosciences, “Despite the mild addiction to cannabis and the possible enhancement of addiction to other substances of abuse, when combined with cannabis, the therapeutic value of cannabinoids is too high to be put aside.” Modern research shows that the compounds in Cannabis can:
The reason why Cannabis is such an effective healing agent is because it contains “an enormous variety of chemicals. Some of the 483 compounds identified are unique to Cannabis, for example, the more than 60 cannabinoids, whereas the terpenes, with about 140 members forming the most abundant class, are widespread in the plant kingdom.”
Regarding cannabinoids, they are “a class of diverse chemical compounds that act on cannabinoid receptors in cells that repress neurotransmitter release in the brain.” Essentially, THC “potently activates the G-protein-coupled cannabinoid receptor CB1 and also modulates the cannabinoid receptor CB2.” Few substances on the planet can do this.

There are several blog posts out there that have gone viral sharing 42 Medical Studies that Prove Cannabis Can Cure Cancer and other similar topics. One thing is clear: THC and other cannabinoids have been shown to inhibit tumour growth and angiogenesis in animal and human in vitro (cells in a petri dish) studies. However, the antitumoral effect of cannabinoids hasn't been tested on humans to a great extent, and we need to be careful not to jump to any premature conclusions. Otherwise, we'll start see reports that Cannabis can cure everything but death!
The list is promising and should give researchers and legislatures reason to investigate the effect(s) that Cannabis can have as a natural cancer solution. Take note though that several studies report non-psychotropic effects when THC was administered to cancer patients. This should be of particular interest to people who are against Cannabis because of its ability to get people “high.”

This article has been edited and originally from a larger, more indepth article written by Dr. Eric Z


Posted by Herbmama at 9:38 AM
Email ThisBlogThis!Share to TwitterShare to FacebookShare to Pinterest