Dandelion and it's benefits! 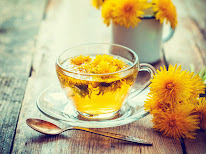 We all know about the weed we once tried to get rid of on our lawns....many of us now think of it differently & know how beneficial it can be to our health! That IS IF we aren't too late & poured too many pesticides & poisons on them in recent years. All parts of the dandelion are great for us!!!!

A mild laxative for constipation symptoms.

Stimulates urinary function to help flush out toxins from the kidneys

Serves to protect the liver from damage.
Helps to reduce cholesterol.

Helps with a sluggish digestive system, because of the bitters, so that the body can remove toxins & other waste quicker, as a result the liver doesn't have to work as hard.

Blood purifier according to folk medicine.

Fact: the greens of the dandelion plant provide 535% of the recommended daily value of Vit. K which may be the most important source of any other plant-based food to strengthen bones, but may also play a role in fighting Alzheimer's disease by limiting neuron damage to the brain. Dandelion greens also give the body 112% of the min. requirements of Vit. A, an antioxidant carotenoid which is particularly good for the skin, mucous membranes & vision.

There is also evidence dandelion greens might prove helpful in treating AIDS & herpes. The roots show an ever-increasing possibility in the fight against cancer! New studies have shown that it selectively kills only cancer cells as opposed to radiation & chemo which kills healthy cells too! During chemo, it can help support the liver & kidneys, boost the immune system, help to detoxify, can help with nausea & mouth sores.

However, dandelion can interfere with some prescriptions & that is called contraindications...SO if you are taking lithium, quinolones or have allergies to the leaf or have endocrine impairment, do not take the leaves or any part of the plant until it has been discussed with your doctor.
Posted by Herbmama at 12:16 PM
Email ThisBlogThis!Share to TwitterShare to FacebookShare to Pinterest