Sugar...in all it's glorious forms! 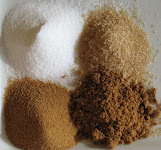 Evaporated cane juice is one of the other names showing up in many products on the shelves of both hybrid and conventional grocers. It is available in a variety of forms that vary in texture and flavor. Because it has not undergone the final processing step that removes the last bit of molasses, it is slightly darker in color than white sugar. However, both evaporated cane juice and white sugar are both sucrose, and both contain 400 calories in 100 grams.

Sugar by any other name is still processed….

Whether sugar is eaten in the form of white sugar, evaporated cane juice, turbinado, or any of the other names for it, its effect on the body is the same. When eaten in large amounts, or eaten without fat or protein, each of them will produce the same sort of insulin spike, weight gain, immune system suppression, and increased chance for diabetes.

The terms raw sugar and natural sugar are more words used by the manufacturers of today, but the terms are misnomers. True raw sugar is processed from sugar cane at a sugar mill and then shipped to a refinery for processing. In this stage, it is about 98% sucrose. Truly raw sugar that has not been processed is unfit for consumption and is not sold. The FDA notes that raw sugar is "unfit for direct use as food or as a food ingredient because of the impurities it ordinarily contains." These impurities include plant residues, bacteria, mold, and dirt. They make up the 1 percent difference between true raw sugar and turbinado.

All sugar is processed from the sugar cane or sugar beet plant, and the two types of plants are used interchangeably. And both have the same results on our bodies. Molasses comes from the 3rd process step of sugar cane. High quality brown sugar is made by cutting short the refinement process and leaving a bit of molasses in the sugar for taste and color. Lower quality brown sugar sold in conventional grocery stores is usually made from processed white sugar with the addition of caramel for coloring. Some brown sugar is even made by processing white sugar through animal bone charcoal to add color.

“What’s in a name? That which we call a rose, by any other name would smell as sweet.” Ole’ Willy Shakespeare said it best, but its not just roses. The same can be said about sugar.

Sugar (in one form or another) is added to more food products than you can ever imagine, especially if you heap on the large number of “variants” of sugar – depending on the kind of processing that has occurred; such as high fructose corn syrup, dextrose, malt, sucrose, and the list goes on and on…and on.

Here is a list to get you started in identifying sugars. There’s only 25 and probably by the time you’re done reading it, they’ll have invented more.

Now, most of these you’ve probably seen before, like brown sugar, high fructose corn syrup, and fructose, but some, like invert sugar, maltodextrin, treacle, and panocha are a bit mysterious. But here are some others you may have not heard of before....

Demerara sugar: sugar that originate from the sugar cane fields in Demerara, a region of South America colonized by the Dutch in 1611.

Galactose: often referred to as galactan, is a sugar glucose found in hemicellulose, a compound present in the cell walls of plants.

Invert sugar: a mixture of glucose and fructose.

Maltodextrin: is produced from starch by a process called partial hydrolysis and may either be tasteless or moderately sweet.

Maltose: or malt sugar is created by the break down of starch and is found in the germination of barley.

Muscovado or Barbados Sugar: sugar farmed on the island of Barbados.

Panocha: a kind of sugar cane found in the Philippines.


Posted by Herbmama at 12:31 PM
Email ThisBlogThis!Share to TwitterShare to FacebookShare to Pinterest