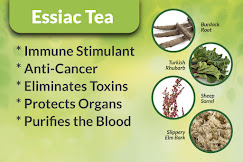 Rene Caisse was a nurse living in Canada for almost 60 yrs. who treated hundreds of people with an herbal remedy she called Essiac (Caisse spelled backwards). She discovered this remedy through a patient in the hospital where she worked who had been cured of cancer. The patient had used an herbal remedy given her by an Ojibway medicine woman.
Rene left the hospital in 1922 at the age of 33 and went to Bracebridge, Ontario, Canada where she began administering Essiac to all who came to her. The majority of those she treated had letters from their physicians certifying they had terminal forms of cancer & they had been given up on by the medical profession.
Rene began gathering the plants & preparing the remedy & giving it to her patients. In some cases, the patients passed on, but many recovered fully & went on to live for 35-45 more years.
So startling was the effectiveness of this simple herbal remedy, it could not be ignored and the Canadian Ministry of Health & Welfare & the Parliament became involved. Friends, former patients and grateful families petitioned Canadian officialdom for Rene Caisse's right to administer the remedy to anyone who asked for it without the threat of interference from authorities. 55,000 signatures were collected on this petition. In 1938 Essiac came withing 3 votes of being legalized by the Ontario government as a remedy for terminal cancer patients.
Mary McPherson was not only a close personal friend of Rene's, but also a patient. Mary's mother and her husband were also patients. They were all treated for cancer & cured by Rene. Mary worked with Rene beginning in the 1930's and she had in her possession all these documents that had to do with Essiac over the 40 years Rene administered it. All the documents Rene had were destroyed by the Canadian Ministry of Health & Welfare at the time of her death in 1978. They burned all that information in 55 gal. drums behind her home!!
Essiac is a non-toxic herbal remedy for cancer that's been with us since 1922!
This is an excerpt from an interview done with Dr. Gary Glum, who in 1986 was a well known chiropractor with offices in Los Angeles. His clients included well-known professional athletic & olympic teams. In 1988 Dr. Glum published "Calling of an Angel", the story of Rene Caisse and Essiac. He has since closed his practice and now devotes his time to investigative writing.
After the interview, it was learned that the Canadian govt. had banned sheep sorrel (one of the main ingredients) for sale & distribution. Shortly after that they also banned St. John's Wort.
Dr. Glum could not find any publishing company to publish his book, so he published it himself. As soon as he did, the IRS came in and slapped about a half million dollars in tax liens against him and he said "You know this has got nothing to do with taxes. It's all about cancer." They actually started hauling the pallets of books out of his medical practice and they were confiscated by the Canadian govt. at customs. He has never gotten any of those books back. The only ones he has left are hidden in storage facilities.
Isn't it amazing what governments will do to stop a true cure for cancer while it becomes one of the largest money makers in the nation, next to oil? And this was back in the 80's!!!
Essiac normalizes the thyroid, heals stomach ulcers (which Rene felt was a precursor to cancer), it regulates the pancreas (so one with diabetes mellitus can become insulin-free), gives all cancer & AIDS patients the enzymes that those diseases have destroyed. Essiac elevates the enzyme system, elevates the hormone system which elevates the immune system so the body can cure itself.
It's even worse today, so we herbalists, have to be so careful in our wording and how we present our 'products' to the public.....big brother is always watching!!!!
Over the years, companies have 'copyrighted' the name Essiac so nobody else can sell their variation and call it Essiac, the name many are familiar with. The first lesson in my herbal studies was how to mix & make this wonderous tonic! I call it a tonic simply because it works on the whole body & doesn't just target certain parts.
Posted by Herbmama at 12:45 PM
Email ThisBlogThis!Share to TwitterShare to FacebookShare to Pinterest